Today is the birthday of the great German conductor Herbert von Karajan (1908-1989), known and respected as a great exponent of the power of music as a means of promoting cultural exchange and friendship between nations.

39 years ago, in October 1979, the West German government sent a world-class ensemble to give cultural-exchange performances in Beijing free of charge -- the Berlin Philharmonic Orchestra and Karajan its conductor added to their concert tour in Japan a trip to the People's Republic of China. They went to Beijing and gave three concerts there shortly after China’s Cultural Revolution. It became Karajan’s first and also his only tour to China. 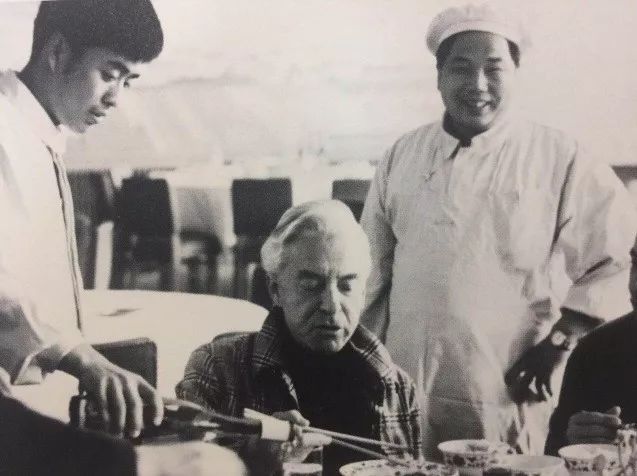 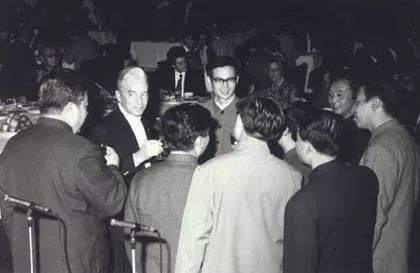 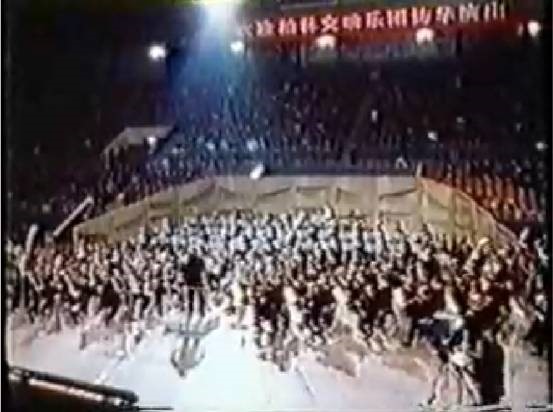 The Chinese authorities pulled out all the stops for the visiting musicians, offering them prestigious accommodation and transportation. The accommodation plan provided by China was this: Single rooms in the famous Beijing Hotel for Karajan, Karajan's manager Peter Girth, and 8 soloists; double rooms in Qianmen Hotel for the rest of the two hundred people; a Hongqi car for Karajan.

The use of the Beijing hotel is an indication of the esteem in which Karajan and the Berlin Philharmonic were held; after the founding of the People’s Republic of China in 1949, the Hotel was affiliated with the Bureau of State Administration of State Affairs for a long period of time and became an important venue for state affairs and foreign receptions. Mao Zedong, Charles de Gaulle and Bernard Montgomery all stayed at the Beijing Hotel. Qianmen Hotel, by that time, was one of the five biggest hotels in Beijing, while Hongqi was a highly exclusive Chinese luxury car brand launched in 1958; original Hongqi models were only for high-ranking government officials and remained in production until 1981 – two years after Karajan used it.

None of the tickets for Karajan’s concerts were sold to the public. Instead, the Ministry of Culture of China invited music students and music professionals from all over the country to come to Beijing to listen to the performances.

After 39 years, the performance landscape in China has changed a lot, in many ways building on the legacy of East-West exchange left by Karajan and others.

According to official reports, the size of the performing arts market in China was £5 billion in 2015, rising to £5.3 billion in 2016.

In such a huge art market, how big is the foreign performance market share?

gave 1,301 performances in Beijing, the combined audience figure was 907,000, and box office revenue reached £22 million. Although the proportion is not large compared to performers from within China, having so much revenue and so many attendees in just one city proves that there is a big opportunity for foreign artists in the Chinese performance market.

Where are those performers from? (Beijing, China, 2017)

Increasing numbers of companies and organisations are beginning to integrate the Chinese market into their global strategy. However, not everyone can get a slice of the cake.

According to stipulations listed within the official guidelines “Regulations on the Implementation of the Regulations on Commercial Performances / Ministry of Culture Performance Approval”, neither locals nor foreigners can engage in any type of live performance without due registration with the Ministry of Culture. There are no provisions allowing international entities to directly register artists/performances in China. Therefore, a foreign artist or troupe would be required to engage a Chinese ‘performance agency’ or a Sino-foreign joint venture – one in which China holds the major share – as only such entities are permitted to register their performances.

Accordingly, before organising a performance in China by a foreign artist, a Chinese agency will be required to register the artist or ensemble’s details (including information on personnel involved, the description and details of the act, equipment/instruments in use, and so on).

Here are some examples:

1. An attention-seeking fan of the Taiwanese band Mayday proposed to his girlfriend at the band's concert at the Hong Kong Coliseum in 2016. The organiser was fined more than £900 as a result, because the gig ended 10 minutes late after the fan sidetracked the band.

2. In November 2017, Chinese folk singer Zhao Lei cut his Beijing concert short without notifying fans in advance: He only sang 27 of the 40 songs from the set list he submitted to the authority that grants permission for public performances. Zhao was fined about £5,600 for failing to make it through his preapproved set list during a concert.

3. On 28 November 2017, Victoria’s Secret Fashion Show was hosted in Shanghai. Four foreign artists didn’t get the necessary visas; according to unofficial news, some of the rejected, such as American Singer Katy Perry and top model Gigi Hadid, failed to get Chinese visas for political reasons. Perry was told she’d been granted a visa, only to have the decision reversed after Chinese officials got wind of a 2015 performance in Taiwan in which Perry wore a dress adorned with sunflowers—a flower associated with anti-China protesters—and donned the flag representing Taiwan as a cape. Gigi Hadid may have been barred because of an online video in which she appears to mock Asian facial traits.

Although China's performing arts landscape is sometimes influenced by political factors, the classical music field seems to be an exception. Not only did Karajan – a controversial figure due to his much-disputed association with German fascism – receive warm hospitality in China shortly after the Cultural Revolution in the last century, but other classical performing arts groups since then have likewise generally had a smooth ride. In recent years, the enthusiasm of Chinese audiences for classical music has been increasing enormously.

"The Berlin Philharmonic Orchestra came to China and the tickets were sold out in 2 hours. People started waiting in a queue at the night before ticket-selling day." -- 13/08/2017

For historical reasons, Western classical music has been slow to arrive in China, and the education sector lacks enough music education resources for the public, not to mention the fact that Western arts are still widely regarded as rich people’s entertainment. As a result, when the Chinese people’s enthusiasm for classical music suddenly began to flourish, China’s shortcomings and lack of knowledge of this field emerged; numerous “copycat” orchestras trading on the imagery of the great Western ensembles, and often with very similar names, have sprung up in order to take advantage of the naïveté of Chinese classical music fans. 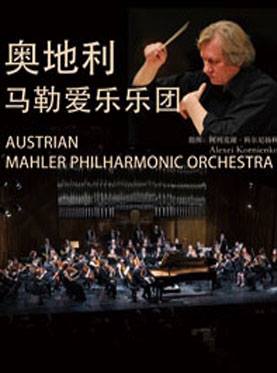 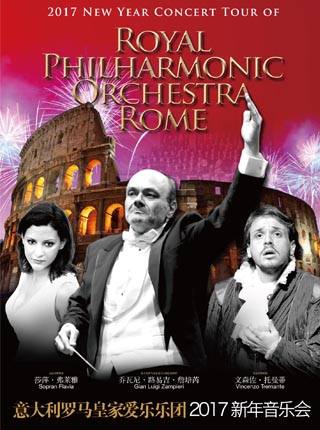 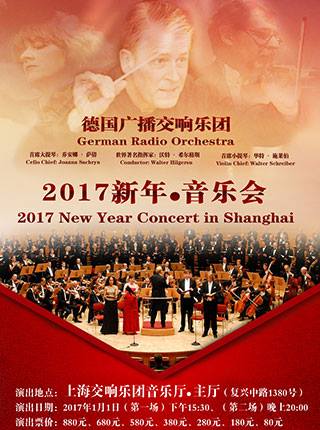 Due to the passion of Chinese audiences, more and more foreign artists and groups wishing to explore the Chinese market have begun to hire Chinese PR and tour consultants, and there is an increasing awareness of the importance of maintaining good relations with local Chinese agencies to ensure the smooth running of performances in China.

In addition to external Chinese-language promotion, many groups have started to consider incorporating Chinese elements into their performances. Many foreign choirs choose the Chinese folk song Jasmine Flower as their final piece. The King’s College Choir of Cambridge University released the music album “Second Farewell to Cambridge” on the 26th January 2018, including two Chinese songs “Second Farewell to Cambridge” and “Jasmine Flower”. Media in China, including many Chinese official media outlets, rushed to report on this.

Recording in Chinese for the new album

"For the first time in more than 500 years, the King’s College Cambridge Choir has released Chinese repertoire worldwide" -- 28/01/2018

The demand for Western art in China’s performance market is growing, but it also highlights a contradiction: China’s first-tier cities have become the headquarters of top international artists because of the venues’ abundant funds and performance agencies’ extensive resources. The schedule in those major cities is almost full, and emerging artists usually struggle to get prime time for their performances.

In contrast, although there are also many art lovers in China’s second- and third-tier cities, these urban venues are not only lacking in the funds needed to attract world famous groups, but also lack the resources and contacts needed to discover, engage and build links with the artists; as a result, their reliance on brokerage agencies is very heavy. Of course, this contradiction presents an opportunity for cross-cultural performance brokers in China and emerging artists abroad, who between them have the knowledge, skills and abilities to take advantage of it.